Katie’s Story: My fight for answers was rewarded when our beautiful baby girl was born 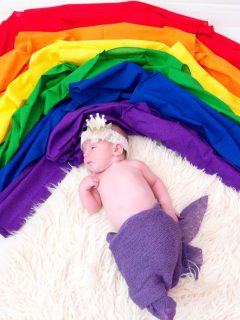 In 2011, I had my daughter Emma. I didn't have a lot of problems during the pregnancy and considered myself relatively healthy. I have suffered from migraines and headaches since high school and have seen several doctors for relief to no avail. I continuously mentioned that I always felt a lot better after donating blood and the doctors shrugged it off....

In August 2014, I learned that I was pregnant again! When I was 3 months along, I had a miscarriage. I had begun bleeding and was terrified. The baby's heartbeat was strong but my levels were going down. Within a week, I had lost my baby. The doctor could not tell me why and explained that it more than likely wouldn't happen again.

I became pregnant again in November 2014. I was so sure I was going to carry this baby and never experience loss again. I began bleeding at work. I had to be driven to the hospital because of the loss of blood. I had a miscarriage in January 2015 and had to have surgery to control the bleeding.

Despite this my doctor refused to do any testing unless I had a 3rd miscarriage. We refused to attempt conceiving until we had answers so we changed doctors (and cities). After telling my story to my new OBGYN, he did blood work immediately and soon had me transferred to another doctor to do more involved testing. Both of these doctors are my life savers and took my concerns seriously.

In May of 2015, I was diagnosed with APS after a second positive test.

In June of 2015, I learned I was pregnant again. I immediately started Lovenox injections and baby aspirin. 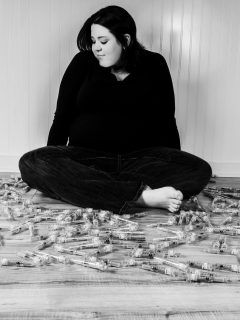 This is me surrounded by the injections I had to take during my pregnancy.

How did this impact on me?

The pregnancy losses impacted my life majorly. My husband was gone during both losses for mandatory military training. I struggled being alone trying to cope with losing not only one, but two babies. I knew others had it so much worse than me but I couldn't understand why they were taken from me. I couldn't go to stores without bursting into tears anytime I saw a baby item. My daughter, Emma, would spontaneously ask me if the babies were in Heaven. I constantly asked God "why" and went through the hardest moments of my life.

When we learned that I was expecting in June 2015, I cried. Usually, it would have been tears of joy. These were tears of fear. I used a Doppler radar at home to continuously check my baby’s heartbeat. I became panicked when I didn't feel her move within a certain time frame.

In August, we held a gender reveal party determined to make the best of this pregnancy. We learned we were having another little girl and were thrilled! I went home to take a nap and woke up with blood running down my legs. I just knew I was miscarrying again. We rushed to the ER and found that I had a placental abruption. We prayed, my family and friends prayed, we begged. After about two hours of testing and ultrasounds, we watched the placenta heal itself!

What helped to get me through

My faith, my doctors, and my family! My faith was greatly shaken but I still prayed regularly. My doctors are some of the most intelligent that I have ever known. They were very understanding and communicated with me in a way that I needed. My family has stood by my side and picked me up every time I have fallen. I wouldn't be anywhere I am today without them.

My advice to others

If a doctor does not take your concerns seriously, consider changing doctors. I truly believe the Lovenox and baby aspirin are why I have my second daughter here with me today.

Utilize resources! APS is a relatively unknown condition and the resources are limited, especially in the United States. I started researching the books available and only found two. I ordered them and began researching. I wanted to know "what", "why", and "how".

Don't give up! Your attitude will determine the outcome of how you feel. There will be bad days and good days, try to focus on the good days! Find a group that can understand what you are going through and have experience of the same condition. They are not only supporters, but a great resource.