The History of Warfarin

The discovery of Warfarin was made by chance, much in the way Alexander Fleming discovered penicillin.

In the early 1920s, an unusual outbreak occurred in the USA and Canada. Cattle were found to be bleeding to death following only minor trauma or after relatively safe procedures, such as dehorning and castration, had been performed. Soon after the outbreak started, Dr Frank Schofield, a Canadian veterinary pathologist, found that the affected cattle had all eaten mouldy hay from sweet clover crops. Further research on rabbits proved that it was only spoiled hay from sweet clover that had this haemorrhagic effect but the exact identity of the substance causing it was to remain unknown for many years.

Over the next 20 years various scientists from the University of Wisconsin continued to study the spoiled hay and eventually managed to extract a compound which was later named dicoumarol.  This dicoumarol could not act as an anticoagulant on its own.  It was only after it was metabolised by fungi that it exhibited anticoagulant properties.  This explained why only spoiled hay caused the outbreak in the cattle.

After many more years of research, and further refining of the compound, Karl Link, a chemist from the University of Wisconsin, managed to synthesise a more potent anticoagulant from dicoumarol. It was at this point that the name warfarin was given to the drug.  Warfarin comes from an acronym WARF – Wisconsin Alumni Research Foundation and –arin, from coumarin, which was the molecule present within dicoumarol. 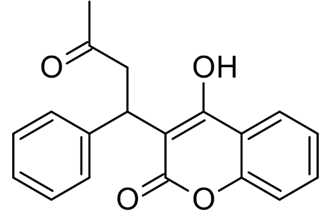 Warfarin was first registered in 1948 for use as a rat poison. It was found to be very effective when mixed with food and used as a bait for rats and mice. The sweet odour of the substance attracted the rodents while the delay before the anticoagulant properties kicked in meant that other rats and mice were not deterred from eating!

It was still some time before Warfarin was to be used to treat humans. The main reason for the delay was concern about the risks, particularly of haemorrhage.  Much of these fears were allayed when a man who tried to commit suicide by taking the rat poison was treated with Vitamin K and made a full recovery.  The knowledge that the effects of Warfarin could be reversed meant that scientists could now look seriously at how Warfarin could be developed for use in humans.

In 1954 Warfarin was first approved for medicinal and therapeutic use.  Endo Laboratories manufactured this first form of Warfarin for use by humans under the brand name of Coumadin.  One of the most notable early users of the drug was Dwight Eisenhower, a former US president, who was given the drug after suffering a heart attack.

Over the course of the next 60 years Warfarin was used to treat millions of people and today, remains the most widely prescribed oral anticoagulant drug in the world.