Many foods react with Warfarin (Coumadin®), here I will explain about the Grapefruit and Warfarin interaction.  Grapefruit is one food that has significant interaction with Warfarin.  As a matter of fact it interacts with many medications and is sometimes best avoided if on medication.  As a Superfood, it offers many benefits.  So why should we be mindful of this fruit when taking warfarin?

Grapefruit has a huge amount of Vitamin C and is also high in potassium. Therefore these days it is labelled as a ‘Super Food’.  For people following a healthy diet, this fruit is known to contain over 300 therapeutic properties.

An article in The Medical News Today site explains the benefits of this fruit.  "The powerful nutrient combination of fibre, potassium, lycopene, vitamin C, and choline in grapefruit all help to maintain a healthy heart."   For warfarin users it is also very low in Vitamin K. 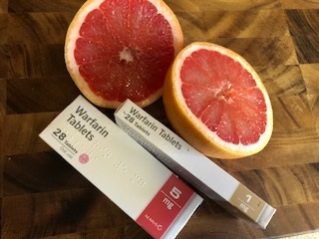 The Grapefruit and Warfarin Interaction effect is where Warfarin as an anticoagulant is inhibited by this fruit.  Both grapefruit and grapefruit juice affect how our liver removes the Warfarin out of our bodies.  Flavonoids contained in this fruit, have been found to interact with isoenzymes.  The body reduces its ability to metabolise the Warfarin, thus increasing the effects of the Warfarin.  This in turn, increases the risk of bleeding side effects.  It is all very technical when looking into the Liver and Iso Enzymes.  Research papers discuss enzyme CYP450 involving the livers function and how this interaction occurs.  So, given I have no medical history, it would be safer to ask your doctor for their opinion on Grapefruit.

There have been few trials about Warfarin and interactions therefore guidance can be mixed.  There was a Comprehensive Review of Potential Warfarin Fruit Interactions published in 2015.  You can find the information here if you wish to read further:

Warfarin can be dangerous if not regulated and can kill.  A high risk level medication and yet there are not many studies into the dangers of individual foods. I checked the medication leaflet inside my Warfarin tablets today. There is a reference to grapefruit in that it, ‘possibly’ increases the effects of Warfarin.  Is this the case with your Warfarin (Coumadin®) leaflet?

Patients are told, refrain from taking items such as grapefruit or take a small amount daily to ensure consistency.  Information I have found tends to show that Grapefruit and grapefruit juice increase the effects of Warfarin.

What is my take on grapefruit?

If I fancy grapefruit, I would tend to have a small amount on a fruit salad at lunch time.  This gives my medication time to work in the morning.  It is also not too close to my warfarin dose at 6pm in the evening.  I definitely would not take any form of Grapefruit within 2 hours either side of taking warfarin.  Generally, this gives time for food to digest and minimises the grapefruit and Warfarin interaction.  Alternatively to be absolutely sure, avoid altogether or ask your doctor.  There are many other foods which give such a list of fabulous health benefits that don’t interfere with Warfarin.  So finally, why not substitute it for an alternative?  If in doubt – Sub It.