Olive’s Story: I didn’t recognise I was having a stroke – I’m so glad that my husband did! 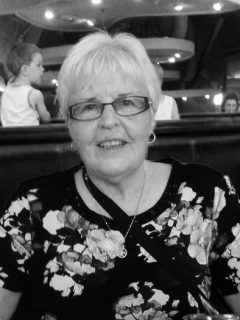 Friday 1st August 2013, an ordinary day. Had the usual quick shower, dressed and went to dry my hair - all as normal. I dropped my hairdryer. Thought nothing of it. Picked it up and kept on going. Apparently I dropped it again but I wasn't aware and had picked it up and kept on drying. Suddenly my husband was beside me upstairs. Unusual I thought! He said "are you ok?" and I said "Fine". "No you're not" says he - "I think you are having a stroke". Rubbish thought I as I answered him sensibly, I thought, but was apparently all gobbledygook. He left. I finished drying my hair. Ran downstairs, lifted the mail and went into the livingroom where my family were gathered. Strange I thought as they insisted I sat down. Next thing I knew there was a paramedic kneeling in front of me saying she thought I needed to go to hospital. "Don't be silly" says me. "I'm fine". My elder daughter took umbrage at this and told me in no uncertain circumstances I wasn't fine to which I laughed. However the paramedic told me she couldn't make me go but thought that I should. As I am a Red Cross first aider I knew this was something we said to casualties and this registered and I agreed. I walked happily out to the ambulance with her talking and joking. Next thing I remember is that I was in a bed in A & E and was trying to text my family to say I would be home soon but for some reason my left hand wouldn't text. A doctor came in then and asked my husband if my face was drooping as she felt it was. Then things moved quickly. I was X rayed and then had a CT scan. These I remember but I don't remember being moved to the ward until I realised I was in a different bed. Very quickly I was then moved again to High Dependency and a drip with a clot busting drug was inserted in my arm. A nurse sat with me all the time until after the drip was removed and then I was transported back to the ward where I remember nothing else until the next day.

I woke around 7 in the morning, lifted my towel and sponge bag (how they got there I have no idea) and merrily went for a shower. I was fine. I was discharged the next day after further tests. I was lucky as my husband is also a first aider and recognised the symptoms of me having a stroke and got attention for me very quickly by dialling 999. Apparently there is only a 3 to 4 hour slot and after this they cannot give you the clot destroying drip. I did suffer a little mental trauma after the event as I just couldn't believe it had happened and that I had been so lucky. Also that perhaps I would have another bigger stroke soon as the hospital had said the first year was the worst danger period. Six months later I was diagnosed with Atrial Fibrillation which is probably what caused my stroke and I am now on daily Warfarin which gives me a certain peace of mind. I am well and enjoying life, family and holidays.